Being on TV in NYC! (Well, at a distance, anyway…) Traveling again, Part III

We slept in on our first morning in New York City, only getting up in time to order the Hyatt’s bare bones bag breakfast. This is part of what I love about vacations; I still get up and do my yoga each day, and may keep up my daily meditation (or not). But I don’t have the responsibilities of doing laundry, feeding the cat, planning what we’re going to have for dinner…on and on, as I do at home. I often get more sleep on vacations, even though I am “retired,” as long as the bed’s comfortable and there are blackout drapes. 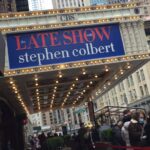 We needed to be at the Ed Sullivan Theater for The Late Show with Stephen Colbert by 3:00 for a 4:30 admittance. It was raining, so we just hung out in the hotel room until about 2:30. I didn’t take my scooter, since in a downpour, which we might encounter, it’s really not fun to be on a scooter, especially since it’s very difficult to hold an umbrella. Getting in and out of a taxi that drops us in front of our destination is easier. I took my crutches, and as soon as the staff in front of the theater saw me, they knew I was one of the disabled people who had signed up for accessibility, and invited us to skip the long waiting line. As soon as the nice young woman saw our tickets and checked us in, she said, “Come back at 4:30 and we’ll take you right in; you won’t have to wait in line. There’s a Starbucks across the street.”

We looked at each other, surprised at this 90 minute wait, and started off in the light drizzle. Right next door on Broadway there was a pizza place with other Italian dishes: Angelo’s. How bad could it be? Turns out, not bad at all; pretty good in fact. I had the Romana salad with salmon, and a side of broccoli, all of which was enough for two people, plus a prosecco, of course; Richard had the fettuccine carbonara. If you go to The Late Show, this is a good place for a quick very early dinner or late lunch. 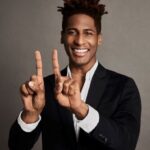 After we were seated in the theater, they had a warm-up comedian who coached us on how LOUD to cheer, where to watch for the applause signs, and so on. I went out to the restroom one last time and when I re-entered the theater, I almost ran into Jon Batiste, the show’s lead musician, as he came up the aisle playing his melodica (portable keyboard wind instrument0. That was a treat, especially since we were seated way in back on an aisle, so he was the only “star” we saw up close. Stephen did a funny monologue and then actually interviewed Jon, who had just won eleven Grammy awards! You could tell that they have a very close friendship. Jon Batiste is an accomplished musician, a humble and kind person, and also expresses his exuberance through his unusual hair styles and striking, colorful fashion sense. Stephen also interviewed an author whom I’d never heard of, which was somewhat interesting, but they cut her interview from the final recording, which I’m sure was really disappointing for her. When we watched the show on our hotel TV late that night, we could see our tiny onscreen selves for about one second in the camera sweep of the audience. Our house sitter recorded it for us so we can watch it again ad nauseum.

The next day, Wednesday, we had tix for Late Night with Seth Meyers, and were to arrive there before 3:00, so our Lyft dropped us at the NBC entrance at 30 Rockefeller Plaza at 2:30. Late Night also has accommodation for disabilities, and again, it looked like rain, so I was using my arm cuff crutches. There was a much more substantial walk to the studio waiting room, after taking an elevator, and more security and ticket checking to deal with, but we were eventually seated in the studio’s large waiting lobby with perhaps 100-200 other people, for about a half hour. It seemed like some of the staff wasn’t really sure what they were going to do with those of us with disabilities, but eventually someone came and got us and we took another long walk and went up another elevator, followed by another long walk. I was beginning to wish I had brought my scooter despite the rain.

The Late Night studio is an amphitheater, so we were way up at the top on an aisle. Fortunately, it’s not a huge theater so we could see Seth and anyone else on the stage set fairly well. (Both these TV show venues also had TV screens on which to watch the show, so if you weren’t in the first few rows you could still see. However, Stephen Colbert’s TV screens had bright lights atop them, so I had to shield my eyes to look at the screen. I could either squint and lean side to side to see the performers in person, or feel like I was looking at the sun to see the TV.)

Again, a warm-up comedian, who was more assertive about getting us to be LOUD in our cheering. Seth talked to the audience a bit (as Stephen also had done) and took questions; people mostly wanted to know about his experience working on Saturday Night Live. I would have liked to know more about his wife, as he rarely talks about her, probably per her instructions! In the middle of the audience interaction, Colin Jost, who co-hosts Weekend Update, a segment on Saturday Night Live (and he’s also married to Scarlett Johansen, the actress) suddenly appeared. He stood about four feet away from me at the top of the stairs, and he and Seth bantered back and forth. I could see that Colin has one of the best complexions I have ever seen on a human being, and that he was not wearing any makeup. His co-host, Michael Che, is Black, and they tease each other mercilessly about white or black culture. Welp, Colin is truly about as white as they come, as to skin, anyway. 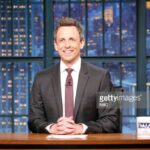 Seth interviewed Jerrod Carmichael, a gay black comedian who had just come out publicly. He had just spoken with his mother on the phone about coming out prior to the interview, and felt very emotional about it since his parents only partially accept this. Seth is a skilled interviewer and frequently asks the deeper questions and has clearly done some research about his guests, as he doesn’t tend to work off cue cards once he’s done the monologue. He then interviewed Sienna Miller, an actress we’d never heard of, and after the deeper content of Jerrod’s interview, the second interview didn’t leave an impression.

When the show was over, we were the first to leave, being escorted by the same gracioius page who had taken us to our seats. I immediately told him that I needed to use the restroom before I left. He said, “Ok, we can get you to one; it’s a bit of a walk.” We walked back to the elevators so I thought, oh, the restrooms must be near the elevator or he’ll take me back to the lobby restroom. Oh, no. We went to the ground floor and were given a vague, “It’s down there aways” instruction. There’s a mall just off the street level lobby and Richard walked several minutes down one direction while I waited, standing with my crutches. He didn’t find the facility. We asked another random employee, having lost the attention of the accessibility page, and he told us to take the elevator down one floor, showing us to what seemed to be an employees’ or freight elevator. Down one floor to the basement, and the elevator operator told us which direction to go. We walked, and walked, and walked, and must have gone at least a quarter mile or more before we found the restroom, with me leaning against a wall to rest every so often. “A bit of a walk.” Uh-uh, it was way too much for any person using a cane, crutches or a walker. It would have been quicker for me to go out and hail a cab and get back to the hotel!

Afterward, since I was no longer in the very uncomfortable state I’d been in for about an hour, we took a bicycle taxi back to the hotel. The fellow seemed confused about how to get to the hotel, turning around mid-block several times, though one time had a clear purpose due to traffic and one-way streets. I think he was new at his profession, and possibly just arrived from a country in Eastern Europe. He shared some small talk at a red light with another bicycle taxi guy in a language which came from those environs. 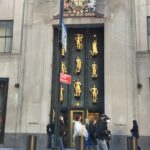 It was, though slow and roundabout, a nice way to see the area, as long as he wasn’t charging us by the minute! I took a few pictures and we landed at our hotel; Richard got me a chai from the Starbucks across the street, and we relaxed a while before getting ready to enjoy our next entertainment.