I had procured two tickets for “Wicked,” the NY Broadway show which elaborated the story of the two witches from The Wizard of Oz, several weeks before we left on our trip to the East. It was easy enough to get them online, but since we were somewhat close to departure, there was a kerfuffle about how we were going to get the tickets, which for some reason the system would not let us print out. Eventually I transferred them to my husband’s iPhone, but after that, I could no longer access the tix online, just the fact that I’d bought them. So that was a little weird.

I was a bit nervous that the system might not show them on Richard’s phone, or that we’d leave the hotel without the phone, but all went well. The Gershwin Theatre was only three blocks from the Hyatt Centric, so I rode my scooter and Richard walked. At the theater entrance, we were asked for vaccination cards, and with the scooter, instructed to take an elevator up to the theater. At the mezzanine, there was a flight of stairs which I had to climb, so I don’t know what the heck they do with people in wheelchairs. We left my scooter on the mezzanine and hoped no children would mess with it, as they tend to want to do.

Well. What a show! We were enthralled from the start, even though we’d seen Wicked years ago in San Francisco. (I learned recently that the SF show had been a preview prior to taking it to New York, when 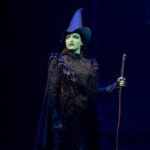 they get the kinks out in preparation for the big time.) Lindsay Pearce played Elphaba, the green witch (not really the wicked witch, just kinda misunderstood) and Brittney Johnson sang as the first black Glinda. They both were amazing, with perfect, strong, clear voices (I used to sing semi-professionally and took voice lessons, so I’m a bit picky about vocal quality), and their chemistry on stage was just great. The set was meticulously detailed and elaborate, as were the costumes, which reminded me of something from The Hunger Games and were 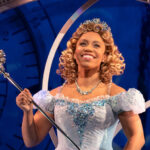 totally appropriate in this fantasy world. Everyone in the production put on a stellar performance. We left the show high as kites, elated.

Afterward we ate at La Masseria, one of the few places I could find for late night dinner in the theater district that had any availability at 9:30. We thought because we were able to get in that it might not be great, but, happily, it was an excellent restaurant. They had a very good wine list (I had a glass of French champagne), we had delectable fried zucchini as an appetizer (none left from the fluffy pile to take back to the hotel), and our entrees, Agnolotti and Pollo Paesano (country chicken) were perfect, as was the apple tart we shared for dessert. The maître d’s family owned the restaurant, and he was friendly but not intrusive, telling us about how they’d recreated the feel of an Italian country home for the interior of La Masseria. We loved the tiny table lamps so much that Richard looked them up online and we ordered two to use on our patio in the summer. Our chance reservation turned out to have topped off our evening splendidly.

The next morning I got an email from Late Night with Seth Meyers, saying they were glad to have us at the show the previous afternoon, and I took advantage of this to tell them how much I appreciated the special seating, but that the treatment afterward, of not allowing a disabled person using assistive walking devices to use a close restroom, bordered on elder abuse. I never heard back from them. Sometimes an apology is not forthcoming if a business fears a lawsuit, but I thought they could have at least said they were sorry they couldn’t accommodate me. Harumph. 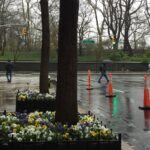 I had read that there was a small museum on Fifth Avenue at Central Park that had a few Klimt paintings and a nice little café that served elegant Viennese pastries. We learned that one could not get a reservation for the café, so we put the scooter in a taxi, it promptly started to rain, and stood (or in my case, sat) in line, fortunately under a scaffolding, for less than a half hour. (I was amused by seeing a woman carry her sizable fluffy white pooch across the street in the drizzle near this corner.)

Café Zabarsky was well worth the wait. The tiny wood paneled room was crowded with booths and dark wood café tables and chairs, imbuing it with a distinct European mood. (The hostess originally sat us at a table with unpadded chairs, which aggravate tendon pain in the back of my stronger thigh. I muttered about that; the waitress heard me and said she had a booth vacating right away and could seat me there. I felt very cared for!) Assuming that you like hearing what we eat at all these terrific places, here’s the fare at Zabarsky: Assam tea, hot chocolate, crab salad, salmon sandwich, and for dessert, a delicately layered light pastry and a mocha chocolate layered torte, all of which were decadently delicious. We did a quick tour of the Klimts and other Austrian artists, but honestly, the café was the highlight for us. A spot we’d definitely seek out again.

That evening, we had tix for “Dear Evan Hansen,” which I had not been excited about seeing, but Richard had heard the lead male was fantastic. Upon our arrival we learned that he was not performing that night. I don’t know if it was that or that most of the show was done in a recitativo style (nearly all the lines were sung; there were songs, but none of them stood out for us as memorable), but we just didn’t enjoy this show very much. Additionally, the subject is teen suicide, which I had not known. It was not morose, but this is obviously a tricky subject to address in a musical. I kept trying to determine who they thought the audience was expected to be; the message seemed to be that teens should not give up on their lives or themselves and that many teens feel depressed or hopeless, so they should remember that people care, maybe get some counselling; and that other kids feel the same, so seek them out.

But I also thought, This is too expensive for most teens to see. Perhaps it’s aimed at parents who need to pay closer attention to the emotional state of their teenagers, or parents who are already aware that their kids are depressed or on the verge of nihilistic. And here we were, non-parental older people who are aware of teenage angst, and possibly should be contributing to suicide watch organizations. But as entertainment, it didn’t work for us, especially after seeing the remarkable Wicked the night before.

Afterward, Bar 54 at the top of the Hyatt provided another simple dinner. In the morning, we needed to get an early start, so we wanted something quick before settling in for a little reading before bed. I read The Vanishing Half by Brit Bennett while we vacationed, an enthralling and very well plotted book about two Black sisters, one of whom passes for white throughout much of her life, while being estranged from her family. Highly recommend it.