Sunday morning in New York came with a bit of a challenge. It had turned out that the convenient garage across the street didn’t open until 10:00am, which they had not told us until we deposited our car there Saturday evening, and we were supposed to have the rental car back to Avis by 10:05 Sunday morning, with a scant grace period. Richard was at the garage at 9:50 and they opened up a few minutes early, so he was out of there like a shot to drive the mile to the agency. Avis charged us for an extra hour, but not an entire day’s rental. They said they’d have been more gracious if cars were not in such short supply right now.

While Richard handled that, I made breakfast reservations for our last full day in the city. Despite their best intentions, the Hyatt Centric boxed breakfasts were really wearing on us. After checking to see what restaurants locals and tourists thought had the best brekkies in the Times Square neighborhood, which also served a bit on the late side, I chose L’Adresse American Bistro at #5 Bryant Park (6th Avenue). I also wanted to check out Bryant Park. It was about seven blocks away, which was a nice walk for Richard (to work out the stress of the rental car return) and easily doable for me on my little TravelScoot electric scooter.

Well! L’Adresse turned out to be a smart choice. There were many seats in the large high-ceilinged room which had a view of Bryant Park through the front windows. In perusing the menu, I was a little surprised to see uni, and wagyu steak and eggs, but as I gazed around the room, trying to be subtle, I saw that about half the clientele was Asian. There were also gluten free and vegan options, so there was definitely something on offer for everybody. Richard had his go-to, eggs Benedict, and I splurged on carbs and got a special: French toast stuffed with cooked apples, with sides of berries and (real) bacon. (We usually have turkey bacon at home because we’re so virtuous.) They had a very good selection of teas and juices as well. After this delightful repast, which ran around $100 (I did say I splurged, right?), we crossed the street to enjoy a stroll around Bryant Park. 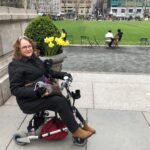 We had read in a traveler’s comment that there was not wheelchair access to the park, and if you were on 6th avenue that would appear to be true, since there are several steps up into the park. But we discovered that the writer had just not wheeled far enough. The ramp entrance to the park is on the side street, West 40th, right across from the entrance to Bryant Park Hotel. (I’d consider staying at that hotel on our next trip. It’s not as close to the theater district, but close enough, and having the park right out the front door is very appealing.) I could scooter around nearly the entire park once I was within its parameters. There are places to purchase light meals and drinks, many places to sit, a huge lawn, lots of flower beds, some of which had just been planted with spring daffodils, a merry-go-round, and a more substantial café at the end nearest 5th Avenue. If it had been a warmer day we would have sat with our books and enjoyed the scenery and done some people-watching.

By this time, it was mid-afternoon, so we went back to the hotel and started packing for our Monday morning departure. That’s never my favorite part of vacationing, but it’s always easier on the return trip than the initial packing. I had intended to send a few things back via a nearby FedEx, the snow boots I hadn’t needed in Canada and some heavy sweaters I had worn there, to lighten our luggage (and avoid the potential weight fees on the return trip), but never got around to it. So, we were coming home with the same heavy clothes we’d brought from California for Canada. It turned out the weather was expected to be cool in San Francisco, so we’d be wearing warm clothes home anyway.

On Sunday evening we had reservations for Nougatine, one of two Jean-Georges French restaurants at 1 Central Park West. Our intention had been to find the best French restaurant in NYC that had an opening, which was at 5:00. The best of our meal was at the beginning, sorry to say. These were the burrata and strawberries appetizer and the pea soup. One bright spot was my glass of Billecart Saumon champagne, a favorite of mine and rarely available on the West Coast of the US. We had sea bass with asparagus and salmon with broccoli as mains, and they just were not that impressive. We eat fish regularly; I cook it nicely, and I guess we’ve become pretty picky. I remember one of the two fishies being dry and neither having much sauce or seasoning. Dessert was nice, a pudding and a scoop of sorbet. But we came away thinking the post-show Italian dinner we’d had at LaMasseria was actually better! Live and learn.

Our flight was out of Newark at noon the next day, so we had to leave the hotel at 8:30, early for us, but we managed. At least we didn’t have to get a Covid test first, so that gave us an hour we hadn’t had when leaving Canada. I finished Brett Bennett’s The Vanishing Half on the plane and watched a movie; dozed for a few minutes, and before we knew it, we were landing in very cool and windy but sunny San Francisco. I was glad to be wearing my long wool coat! Our house sitter had meant to pick us up at the airport, but my car’s battery had died while we were away, and his car was too small for the three of us, all our gear, and my scooter. So, we took a Lyft SUV back to San Rafael which worked out fine. We were not at all delayed by the change.

I had intended to go shopping for flowers for our housecleaners as an Easter gift upon my return but didn’t have the energy. I am more fatigued from travel than most people are, and sometimes my ambitions are greater than my physical ability. I realized I had previously ordered some fancy chocolates for Easter, which arrived while we were away, so those became the women’s Easter gifts, along with a little extra tip, so they were happy and none the wiser on Tuesday morning.

We’d had a relaxing, entertaining, and love-filled trip. We’d had several heartfelt days with my Allen cousins in Toronto, seen four shows and one museum in NYC, eaten enough great food to have gained a few pounds, seen friends we’d been missing plus our sweet nieces and nephew, and the rotator cuff tear in my shoulder from February had stopped hurting for the most part after the steroid shot I’d had a few weeks before we left on the trip. When I told the shoulder doc, he said, “Obviously, you need to take more vacations!” I’m all for that. It was so great to travel outside our California driving distance again.

And it was also so good to be home and settle in front of the TV with takeout Indian food and our kitty sprawled out on the sofa with us, purring to let us know she was glad we were back.