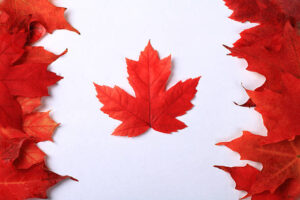 My beloved cousin, John Allen, died too young, not long after his 69th birthday, on April 1, 2020, in Toronto, early in the pandemic. Although he was a distant cousin (our shared ancestor is way back there about five generations), we had felt a strong connection since meeting more than twenty years ago. He reminded me a bit of my dad, affable, brilliant and affectionate, in addition to physical similarities, and my sister had said she also saw the resemblance in a photo of John. John had stated his fondness for me, despite our distant relationship and relatively recent friendship, saying, “It must be the blood calling.” 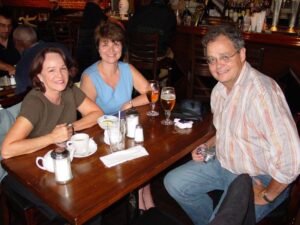 It was impossible for his wife, my friend, and cousin by marriage, Karen, to plan his memorial in Toronto until recently, due to Covid restrictions.

And so it was that I felt both joy and sadness to be planning my first flight in nearly three years, which my husband and I agreed would be a vacation, despite the primary purpose. We decided to travel on to New York City after the visit with my Allen cousins in Canada, since we’d already be in the Northeast. However, I didn’t get started on bookings until about three weeks before we needed to arrive in Toronto! We had not been sure we could go, especially if Covid cases had ramped way up.

The flight reservations involved a few difficulties. Once we decided we’d be gone a bit less than two weeks, to allow a week in NYC, we found that it was challenging at the late date to get direct flights. It is hard on me to do connections; the travel to and from any destination is already tiring for me, given my polio-related fatigue issues, and I can’t sprint to a second flight that has a short connection window. Even with my TravelScoot scooter, direct flights are a necessity unless impossible.

We decided on a red eye on a Wednesday night, and since we’d arrive in the early morning, we also chose to book a hotel for Wednesday night so we could have our room for a nap before meeting cousins for dinner Thursday evening. We couldn’t get a direct flight to JFK on the following Monday, so we accepted a puddle jumper to Newark, New Jersey, which meant we’d fly out of NJ again to go home. Not as close as JFK, but, much quicker than multiple flights. Next we scheduled the required PCR Covid tests, which had to be accomplished no more than 72 hours prior to our boarding for Canada. There are limited times and places this can be done, but we found one for the Monday before our flight a few miles from our home. We reserved a car at the Toronto airport and set up our phones for international calls, which is essential when travelling outside one’s home country.

Getting the Toronto hotel was easy. I’d researched them for our last visit over a decade ago, and remembered that the one Karen had recommended then suited us well. The Old Mill, which with its traditional décor, friendly staff, ramps leading hither and yon which accommodated my scooter, and pub which was open daily (and nightly) and was a good spot for our cousinly dinner, was the closest to Karen’s neighborhood and the venues of the service and reception. (Unfortunately, it doesn’t have a pool for my needed workouts.) My computer inexplicably wouldn’t allow me to reserve online, so I simply called up and got the reservation handled in a matter of moments, having checked out their rooms online. The Canadian dollar translates well from the American dollar, so I booked a two-room suite since we’d be there for essentially five nights. It was well worth the extra expense, because sometimes Richard worked late, or I’d be up before him and settle in the sitting room (where we also enjoyed our breakfasts, which were simple, limited and not bad) to read for an hour or more in the morning.

Thursday night’s pub dinner with Karen and one of their daughters was as fun and heartfelt as we’d expected; it was good to reconnect after so many years of only Christmas cards, emails, Facebook and phone calls and the occasional Skype. I loved hearing of Aidan’s pregnancy and seeing Karen’s hair grown to shoulder length and now an elegant and stylish white.

Friday it snowed lightly, but all we did was venture out, unaccustomed to the cold, to a grocery store, meandering around in our rental car longer than seemed necessary with streets that were closed for construction and not noted on our Waze app. We did discover that since it was the weekend, no one was paying attention to the “road closed” signs, so we ignored them for the rest of the weekend too, and found that we arrived at our various destinations much quicker. 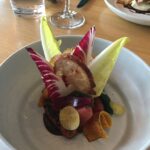 That evening we sprang extravagantly and had a dinner for two downtown at Canoe. The disabled entrance, however, is hard to find and out of the way. I had my scooter and followed the signs, but had to call a security guard to enter the building next door and then be guided down a long hallway and up an elevator, only to find that in that time my husband had parked the car and ended up in the same elevator. It would have been easier to either climb a few stairs or stay with him and park in the underground garage. Inside the restaurant, we were graciously seated in an easy accessible spot with a view of Lake Ontario. Everything we ordered was presented artistically, and most everything was quite tasty. I joked with one of the servers that the Winter Salad looked like a carnival; it had colorful peeled and curled elements, and things standing up in points. Fortunately, she also thought this was funny, and laughed, twice. The personnel were very friendly and not at all snooty, as can sometimes be the case in an expensive place with creative foodie dishes.

Saturday morning, we were somewhat panicked in thinking we were late for the service, but fortunately it started at 10:30 and not 10:00 as I had thought! Sometimes forgetting specifics can turn out to be one’s lucky break. The celebration of life was lovely, and not without some tears, of course; it broke my heart that John would not see his grandson singing “Edelweiss,” which John had taught the boy’s mom and siblings as children. I was surprised to find that I could still sight-read music a little and follow songs in the hymnal. (This may have been my husband’s first experience of singing in a Christian church. I’ll have to ask him.)

The reception was held at the Crooked Cue pub. Lots of food and drink for all us Irish or barely Irish (we Allen’s are, according to our research, English/Irish, but Karen really is Irish and teases us that we’re Cromwellians, which we vehemently deny). We were concerned about being unmasked in a group, but the ceilings were high and there was fair air circulation. Music (blues, of course) was supplied by Julian Fauth, whom John had promoted, and a fellow musician. A few people stepped to the microphone to recount more about John, who is so sorely missed. I was happy to meet two of John’s brothers and a nephew and niece, and invite them to visit should they make it out to California. We spent the evening with my younger cousins at one of their homes with a light and light-hearted dinner, getting up to date on the five kids and several grandkids.

Sunday we got to be with Karen again, despite all the recent demands upon her time, and another of her daughters, who had flown back from Europe for her dad’s service. We enjoyed brunch at the casual Axis Café, with its extensive menu, and Richard got to sample Bethany’s poutine (French fries with cheese and gravy, a Quebecoise dish). Afterward we drove to the cemetery and took the service’s flowers to John’s grave, which was a bit of a pilgrimage for me; I was saying an inner goodbye to him. This particular cemetery has many trees, more than I’ve seen in any California cemetery, and as an outdoorsman, I know John would have appreciated being amongst their beauty for his final rest.

On our last night, we ate at the adjoining restaurant at the Old Mill, which was, sad to say, mediocre, but, convenient. At least it was not expensive. Cheers to Toronto, and my delightful cousins.

Next: On to New York.